$50,000 Gift from the Oscar Rennebohm Foundation 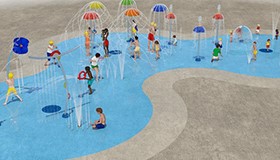 The Madison Parks Foundation is pleased to announce a $50,000 grant from the Oscar Rennebohm Foundation, Inc., for the construction of splash parks at Reindahl Park on the east side of Madison and the west side’s Elver Park.

More than 15,000 park-goers will enjoy the new recreational facilities, set to open in August 2014 with construction beginning in late spring. The City of Madison has committed eighty-five percent of the funding for the project. In addition to the Rennebohm donation, the Madison Parks Foundation was awarded $50,000 from the Evjue Foundation, $10,000 from American Family Insurance and the Madison Community Foundation has also committed $50,000 to the project, but donations are still needed.