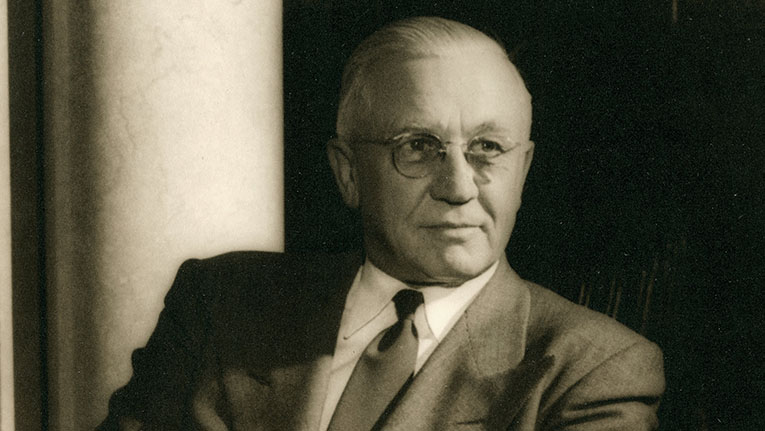 Oscar Rennebohm succeeded in at least four careers during his 79 years. He was a businessman who, from virtually nothing, built a profitable chain of drug stores. As governor of Wisconsin, he was a popular and effective statesman. Rennebohm was a champion of education whose contributions as both governor and regent of the University of Wisconsin loom large in the history of Wisconsin public education. An insightful and visionary philanthropist, Rennebohm’s gifts through the Oscar Rennebohm Foundation, which he established in 1949, have supported colleges and universities, hospitals and medical research, childcare and social service agencies, retirement communities, religious organizations and arts and cultural projects through Madison and Dane County.

Oscar Rennebohm was born May 25, 1889, in the town of Leeds (Columbia County), Wisconsin, one of five boys and four girls in a German immigrant farming family.

The family moved to Milwaukee, Wisconsin where Oscar attended East Division High School and played on the city championship basketball team before graduating in 1908.

He arrived in Madison to attend the University of Wisconsin’s (now UW-Madison) two-year pharmacy course earning his degree in 1911.

With money borrowed from his father, Oscar purchased a bankrupt drug store on the UW campus at the edge of the plot that would become Wisconsin General Hospital.After serving in the U.S. Navy during World War I, Oscar married UW alumna, Mary Fowler.

During the 1920s Oscar acquired six more drug stores and by 1936 his chain numbered 13. In most cases he purchased businesses that were in good locations but financially troubled.The Rennebohm Drug Stores, Inc., which eventually operated out of 70 locations, lost money at only one store in one year during the Depression.

During this time Rennebohm put the failing State Pharmaceutical Association back on its feet with his energetic membership solicitation. The group became the basis of his support when he entered politics.

Visionary governor for a post-war Wisconsin

In 1944, Rennebohm ran for lieutenant governor, his first political office, winning a second term in 1946. He became governor in 1947 upon the death of Governor Samuel Goodland and won the office outright in 1948.

As governor he applied the same principles he applied in his business: diligence, cost-consciousness and obedience to statutory requirements. He encouraged cooperation among state administrators and, although uncomfortable speaking in public, he traveled around the state meeting citizens. Without pomp or formality he was respected and liked even by those who disagreed with him.

Rennebohm did not seek reelection in 1950. In 1952 Governor Walter Kohler named Rennebohm to the UW Board of Regents. Perhaps his most profitable contribution was his management of the sale of the University farms. With land allocated for parks, a state office building and eventually the Hilldale Shopping Center, residential lots sold for more than $5 million and placed more than $40 million on city and county tax rolls.

With failing health and energy, Rennebohm’s public service ended in 1960. He died on October 15, 1968 with Mary at his side.